The Fallen of High Wood

In this video the American landscape artist John Cleaveland Jr. puts the dramatic finishing touches on his painting with the title as above.

Coincidentally, my recent post entitled ‘Body Recovery’ included a piece of a 1919 map that happens to include High Wood. Click here to read. ...read more 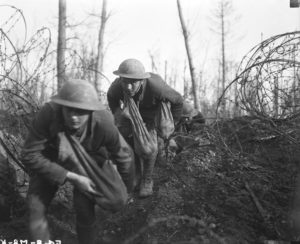 “A French and American raiding party of the 168th Infantry going ‘over the top’ with sacks of hand grenades,” March 17, 1918, Badonviller, France, by Sgt 1st Class Charles White
National Archives, Records of the Office of the Chief Signal Officer ...read more

October 22, 2018 / Blair Tarr / 0 Comments
October 19th marked the 100th anniversary of the unveiling of the massive World War I painting, The Pantheon de la Guerre.  This painting that was created in France even before the war ceased, has had a rather unfortunate history.  What remains of it in Memory Hall of the National World War I Museum and Memorial is remarkable, but a still a shadow of the original painting.

CNN paid tribute to Pantheon for the centennial.  Read about it here:  https://www.cnn.com/style/article/pantheon-de-la-guerre-wwi-painting/index.html?fbclid=IwAR301SCAPwdWRsQ4-wmkt39iArKKoYg4rEHY8ycSmv7YzKUqmkUfuwY5iPI

September 20, 2018 / Blair Tarr / 0 Comments
This Friday and Saturday (September 21 and 22), the Haskell Indian Nations University at Lawrence will honor the legacy of those who served the country.  The program will recreate the 1926 dedication of the Haskell Arch and Stadium–the first tribal World War I memorial.

For more information and a listing of events–and there’s a lot of good information here–use this link:  https://unmistakablylawrence.com/explore/play/unmistakable-events/legends/

Earlier this week, Jancita Warrington, director of the Haskell Cultural Center, and Jonathan Casey, director of the Edward Jones Research Center and archives at the National World War I Museum and Memorial, were interviewed on Steve Kraske’s program, Up to Date. on KCUR-FM in Kansas City.  We have a link to the program here; the Haskell interview starts at 27:10.  The first part of the program is an interview with a candidate for governor in Kansas; we post the disclaimer that this is in no way an endorsement of the candidate.  It’s just that the poster is too clumsy to figure out how to cut him out of the interview!

“Historian R. J. O. Adams tells us that World War One “changed in some way the lives and futures of every man and woman on the planet.” American writer Gertrude Stein, who lived in France during the 1914–1918 conflict, characterized the abrupt cultural shift the war generated by stating that it was only after the war’s end that “we had the twentieth century.”

Over There, Over Here: American Print Makers Go to War, 1914–1918 explores the little studied phenomenon of American print makers and their artistic responses to the watershed cataclysm of WWI. The exhibition includes powerful images of soldiers on the battlefield, while also showing the effects of the war at home–including the prints of those artists in Wichita and in Kansas who artistically reflected the city’s booming aviation business in 1914 and following.

On the 100th anniversary of the conclusion of the Great War, WAM is pleased to collaborate with guest curator Barbara Thompson to reconsider the resonance of WWI–in the United States and in Wichita. Thompson is the granddaughter of Wichita printmaker C. A. Seward (1884–1939), the artist who was the driving force behind the Prairie Print Makers. In our museum’s continuing study of art in Wichita, the Prairie Print Makers and the group’s activities and impact remain very significant.

With the special WWI exhibition, Thompson has authored and produced two related publications. Over There, Over Here: American Print Makers Go to War: 1914–1918 and Wings Over the Prairie: A Brief History of the Aviation Industry in Wichita, Kansas are elegant, informative volumes with rich illustration and vital print history. They are available for purchase in WAM’s Museum Store.” ...read more

September 9, 2018 / Blair Tarr / 0 Comments
The Topeka and Shawnee County Public Library has scheduled talks and exhibits in conjunction with the 100th anniversary of the Armistice ending the fighting in World War I.  These are scheduled for October through January 2019.

–Modern Weapons in World War I.  Dr. Mark Hull of the U.S. Army Command and General Staff College will talk on the subject of weapons introduced in World War I.  The talk is in Marvin Auditorium 101A at the Library at 7:00 p.m., Monday, November 5th.

-Treaty of Versailles.  Dr. Nathan Land from the University of Kansas History Department will talk on the effects of the treaty that ended World War I.  The Talk is in the Library’s Sabatini Gallery at 7:00 p.m., Tuesday, November 13th.

–Kansans Go to War.  The impact of World War I on Kansas through images and stories from the library’s collection.  Opens in the Sabatini Gallery October 1st and runs through December 9th.

-Over There:  Americans Abroad in World War I.  A traveling exhibit from the National Archives showcasing World War I military photography.  Opens in the Sabatini Gallery November 9th and runs through January 6th, 2019.

Web-based Resources from the US Armed Services

Be sure to check out the Army booklets, which are generously illustrated with Signal Corps art work and photographs.

US Army Center for Military History

US Naval History and Heritage Command

National Museum of the US Air Force

July 3, 2018 / James Patton / 0 Comments
On its face, this seems implausible. What does George Washington have to do with World War 1? Click here to find out.

June 28, 2018 / Blair Tarr / 0 Comments
This is the new special exhibit opening tomorrow at the National World War I Museum and Memorial in Kansas City.  It will be there until November 11.

“Eisenhower and the Great War”

March 8, 2018 / Blair Tarr / 0 Comments
At the Dwight D. Eisenhower Presidential Library, Museum and Boyhood Home.  The closing date has to be coming up–check the Library’s website before going!

War erupted in Europe in 1914 and soon involved nations around the globe. The Great War as it became known shocked the world with its massive scope and the industrial-like slaughter created by advances in military technology. The United States reluctantly joined the conflict in 1917 and began to build a large professional army from the ground up. One of the young officers who helped in this endeavor was a lieutenant by the name of Dwight Eisenhower. Eisenhower showed remarkable talent for organization and leadership during the years of American involvement in the war. Tasked with training thousands of inexperienced troops in the new and untested art of armored warfare, Eisenhower quickly built a strong and motivated group of soldiers while overcoming severe obstacles and setbacks. This exhibit tells the story of the Great War and its influence on Eisenhower’s budding leadership abilities. World War I, as it would become known later in the century, proved critical to the making of this American Icon. ...read more