We’ve touched on the sport of hockey before, and the New York Times  has a timely article about the sport and the war effort in 1917.  True patriot love in all thy sons command, indeed! But how could they let a little thing like war interfere with hockey? I’ve shared the article below, but you can also read the original article here.

A Quirk of Canadian History: When War and Hockey Shared the Ice 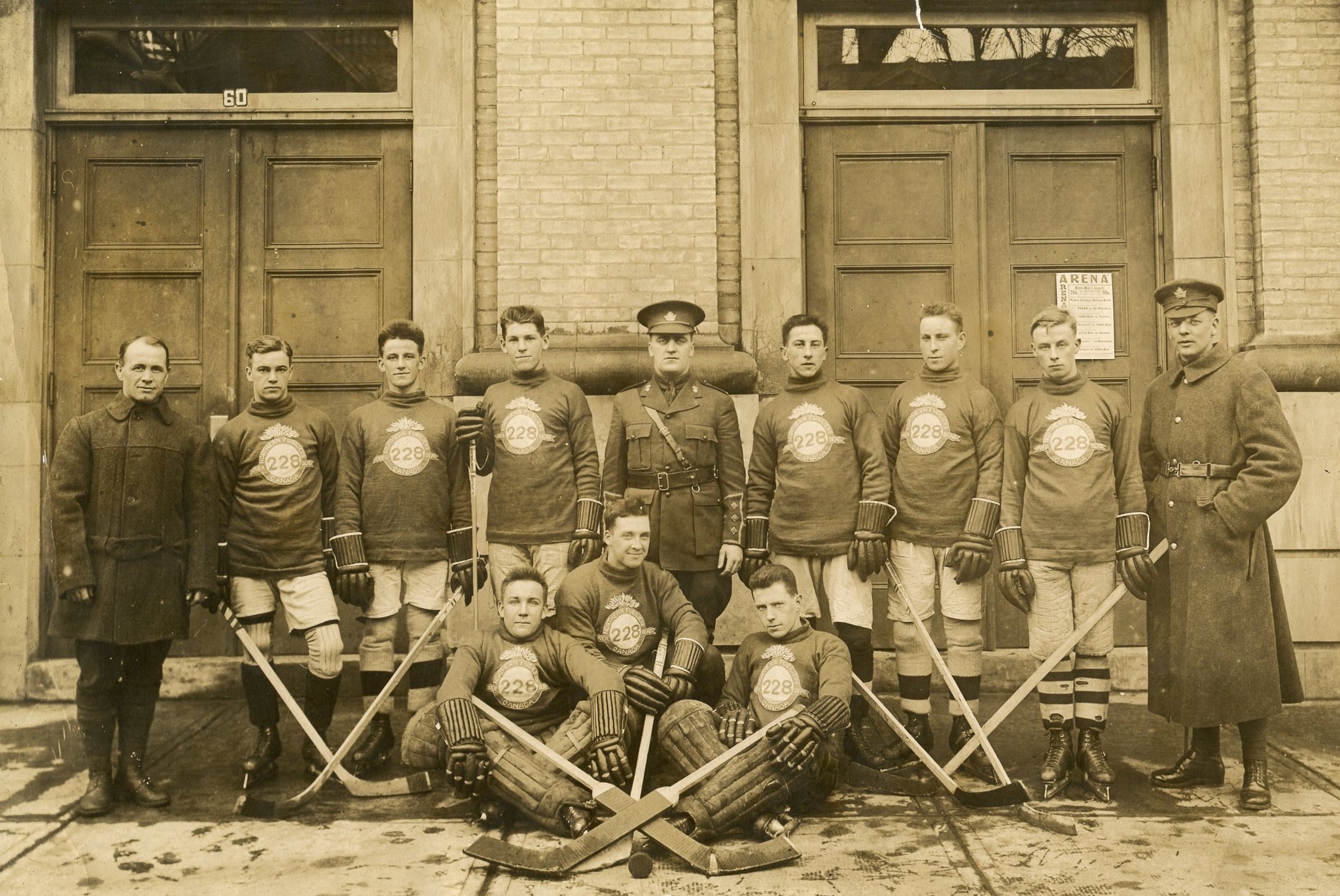 One of the five amateur hockey teams of the 228th Overseas Battalion in 1917. The officer in the middle is Capt. George McNamara, who was one of the pros and acted as junior coach. Credit Hockey Hall of Fame

In Canada, the kinship between hockey and war is implicit. Both (of course) stoke patriotic pride, and there’s the recognition (maybe) that the vivid game that remains closest to the national heart reflects the confusion and desperate violence of the battlefield, while also (somehow) naturally honoring warrior values of bravery and perseverance.

In 1916, war and hockey intersected as closely as they ever have when an active infantry battalion, training before being sent to Europe, competed in a league with the world-champion Montreal Canadiens and other well-established teams.

Taking the ice, the hockey-soldiers of the 228th Overseas Battalion of the Canadian Expeditionary Force wore khaki-colored uniforms, just like their brothers-already-at-arms along the bloodied Somme River in France. Known as the Northern Fusiliers or just plain Soldiers, this was, briefly, one of hockey’s best teams.

It didn’t quite work out. After skating against storied players like Newsy Lalonde, Frank Nighbor and Georges Vézina, the 228th had to retreat from the rink halfway through the season, in a welter of lawsuits and unhappy generals. But if the team never quite got to compete for the Stanley Cup, the ructions arising from its 1916-17 campaign did contribute to the demise of one league and the rise of another: the N.H.L.

For Canadians, another carnivorous year of war started in 1916 with a New Year’s address from their prime minister, Sir Robert Laird Borden. “Already we have learned the full meaning of sacrifice,” he intoned from Ottawa, vowing to double the size of Canada’s army to 500,000 men.

Archibald Earchman, 33, was one officer called on to help fulfill that promise. He had already been to France, and that February he was charged with raising a new battalion, 800 strong.

Based in North Bay in Ontario’s near-north, the 228th quickly filled its ranks.

“Probably the most diversified unit ever recruited in Canada,” wrote The Globe of Toronto, “including such picturesque types as hunters, trappers, guides, prospectors, Hudson Bay company employees and Cree Indians from the James Bay District.”

It would have been impossible in Canada for the unit not to absorb hockey players, picturesque or otherwise. Some military minds thought they had the ideal fighting stuff. A 1916 book suggested that boys used to handling hockey sticks were naturals with rifles: “Firing for hours during a hot and sustained engagement does not fatigue them as it otherwise would.”

When high-profile hockey players joined the 228th in May, future Hall of Famers among them, the news crossed the country. The rising star Duke Keats was aboard, as were the brothers George and Howard McNamara, doughty defensemen known as the Dynamite Twins. Goldie Prodgers, who had scored the goal that secured Montreal’s Stanley Cup championship that spring, signed up, too. 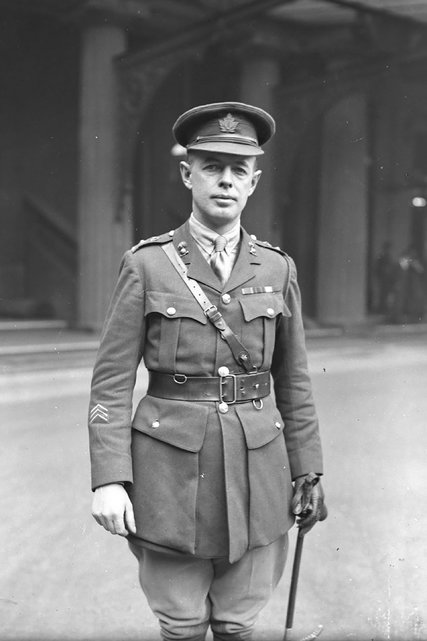 Archibald Earchman, commander of the 228th and architect of the hockey team, in a 1918 photo taken in Toronto. Credit Library and Archives Canada

By July, the unit was at Camp Borden, an open plain 65 miles north of Toronto where 50,000 men were living under canvas. The members practiced marching and trench warfare; suffered from dust, heat and poison ivy; and played every sport their officers could think of to keep boredom at bay: soccer, cricket, lacrosse, baseball.

Away from camp, questions of just how sports should be conducted in wartime kept pressing. Did hockey leagues divert precious resources — namely, young men — from duty, or were they vital to morale?

In early 1917, with the United States about to join the Allied cause, baseball’s leadership wondered how to proceed. Yes, said the president of the American League, certainly the Yankees should incorporate military drills into spring training. But he also pointed out, politely, that nobody had asked for batting to cease during the Spanish-American War.

As fall approached, the 228th took up winter quarters in Toronto, occupying two public schools an easy march from the city’s arena.

Players were plentiful enough in the ranks for the battalion to enter five teams in amateur competition. If the National Hockey Association was surprised by the 228th’s application for a franchise, the eight-year-old professional league quickly saw the advantages of granting it.

With a history of erratic ownership, contract spats and brutal violence, the six-team league was not only welcoming some of the nation’s best players back into its rinks, it was also adding a fine patriotic finish to its profit-minded enterprise.

Lieutenant Colonel Earchman approved the battalion’s major-league hockey operations with his superiors — some of them, anyway. He made the case that a team as good as his would surely bolster recruiting and “induce eligible men in the audience to see their duty more plainly.”

The players took to the ice in early November. First, though, the 228th did what pro teams do: chased free agents. The team helped itself to Art Duncan, a star defenseman from the West Coast, and enlisted the brilliant center Eddie Oatman.

The Canadiens were favorites to top the N.H.A.’s 20-game schedule, with the 228th next in the betting. The 228th showed why as it opened at home against Ottawa just after Christmas. Fans paid a war tax of 2 cents on their 50-cent tickets, which also bought intermission performances by the battalion’s brass and bugle bands. Final score: 228th 10, Ottawa 7.

“The soldiers,” The Toronto World reported, “were a little loose around their own goal.”

They worked on that, and for the next three games, the 228th players were unstoppable. They overran Montreal’s Wanderers, and drubbed Toronto’s team, the Blueshirts. A crowd of 5,000 saw that game, or maybe didn’t: Despite a strict no-smoking policy, cigarette smoke shrouded the ice.